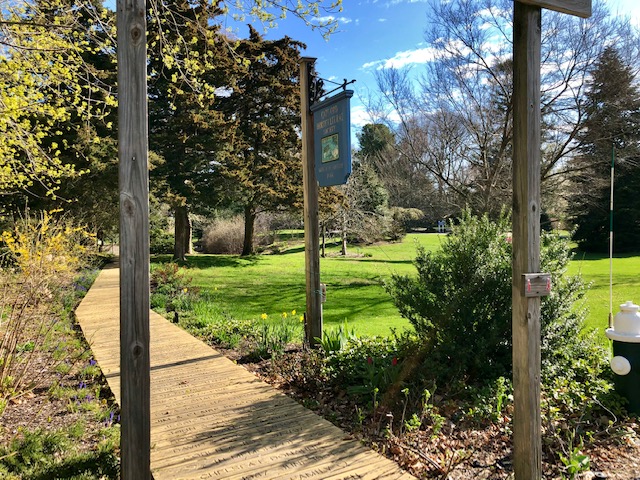 The next time you stop by Fancy’s Market for a sandwich,
wander across the street to enjoy one of Osterville’s most
delightful hidden gems – Armstrong-Kelley Park. Sit on a
bench and enjoy your lunch while watching the kids and
puppies play. Stroll along the trails. Walk the boardwalk.
Watch the fish swim in the pond. Check out the beehives
from a safe distance. Ring the bell at Liam’s Train. The
park is a treasure trove of horticultural delights and peopleand
dog-friendly attractions.

Owned and operated by the nonprofit Cape Cod Horticultural
Society (CCHS), the 81/2 acre park is Cape Cod’s oldest and
largest privately-owned park. The site once included the home of
Cornelius Lovell, Jr (see page 73) who served in the Revolutionary
War. Centuries and several owners later, generous patrons, including
the Armstrong, Williams, and Goodspeed families, gave the land
to the CCHS in the early 1930s.

The organization has completed work laid out in a master plan
commissioned in 1991. Today, the lush park is facing new
challenges and a renewed focus on making the Armstrong-
Kelley Park fit the needs of today’s families. Many passersby think
the Arboretum is where the Park ends, not knowing there are over
4-1/2 acres of trails and many distinct garden rooms. “We’ve used
that master plan as our guide in garden construction and planting.
For the last dozen years, the focus was maintaining the park, by
mowing the lawns and planting the flower beds.” explains Deirdre
Dow-Chase, president of the park’s board since 2018. “My focus
going forward is first and foremost always the physical park. But
now we’re going to initiate more programming focused around children, education and horticulture.”

The Natural Cycle of Sustainability
“The biggest challenges are some of the realities we’ve
come to face, partly driven by nature’s continual day-to-day
growth in the park,” she says. “So, we’re confronted by
nature’s success.” Some of the park’s ornamental trees have
gotten so large, they mask the site lines of the back of the
property, giving the false impression that the park is quite
small. Trees fall in microbursts and snow storms, diseases
set in, beetles invade our pine trees. “It’s all part of nature
and part and parcel of a living landscape,” she adds.
The battle to prune, trim, weed, plant, and tidy the park
weekly is waged by an intrepid team of retirees fondly
known as the “the gorgs gals (sic)” and the “grumpy old
men.” Relying on this dwindling number of volunteers is
a primary challenge that needs to be addressed as the
park looks to the future. “From a business point of view,
you cannot rely on senior citizen volunteers to be your
maintenance crew,” Deirdre comments. “Sustaining the
park in perpetuity is a daunting challenge. So we are
extending our hands and exploring visions with a wide
range of people, municipalities, and like-minded nonprofits
to try to come to terms with our challenges. We
have got to secure this beautiful property forever.”
Dow-Chase has developed strong ties with other village
and town non-profits and businesses. This synergy has
helped with everything from emergency tree pruning after
storms to innovative programs with the Osterville Village
Library and exhibits with the Osterville Historical Museum.
“The Osterville Village Association and the Osterville
Business and Professional Association have always been
kind to the park,” she adds.
Turning from plants to people

During the first year of Deirdre’s tenure, she began to
envision a different type of park – a park she describes as
“contextually framed around the village and showcasing
its historical significance and cultural amenities.” She also
introduced yoga and other exercise classes in the summer
of 2018, and continues to grow the list of activities for
people of all ages through collaboration with the library,
the museum, the Osterville Village Association, village
residents and volunteers. The park is available to host small
weddings and other private and community
events. “We want to shift from a totally passive
park to something more active,” she explains.
For instance, “We’re selling honey from our
bees; we’re bringing in cornhole games; we
have story hour hosted by the Library.”

“I’d love to see people sharing a cup of coffee or playing
chess in the park,” she enthuses. Last year the park added
what she calls “chat benches.” “The idea for them comes
from London, which came to grips with an aging population
who feel isolated. They put up benches with a sign: ‘If you
want to sit on this bench, it means that you’re willing to chat
with someone new,’” she describes. “We now have five chat
benches. We hope it’s a good way for our residents to relax
in the park and make new friends.”
The irony is that it’s local folks who are just becoming aware
of the fact that this is their park. “I’m shocked at how many
visitors ‘Come From Away’ as the Broadway play is called.
We’ve had people from China, Russia, Kazakhstan, Croatia,
Ireland, Albania, Italy, China. I ask them ‘how did you find us?
And they’ll say something like, ‘well, I googled picnic tables
on Cape Cod, and you came up,’’’ Deirdre laughs. “Yet when
I ask a local if they have visited, they are embarrassed to say
they have not.”
A new master plan must include a focus on programming
& amenities that draw more people here. Dow-Chase looks
forward to gathering feedback to help explore strategies,
plan partnerships and launch fundraising activities to sustain
the park, and improve both its condition and programs in
perpetuity for the community.
Deirdre Dow-Chase knows that Armstrong-Kelley
Park is a treasure to be preserved for young families,
who will breathe new vitality into the park. “You see
a toddler take those first six steps and fall down
again on the nice sweet grass. It fills your soul,” she
muses. She urges everyone in the village and beyond
to enjoy and support Armstrong-Kelley Park. “This is
your park. I know you’ve always wanted to drop in.
Drop in today!”