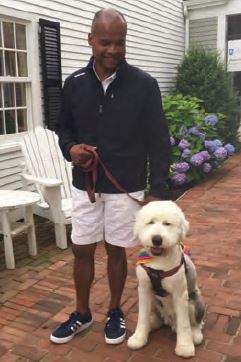 If you see him around town, say “hello.” He’s the guy with the energetic stride and a big sheepdog named “Bistro.” Meet David Bogan, your town councilor representing Barnstable’s 5th precinct. David is a relative newcomer to Oster-ville, along with his wife Heather. Their four children from David’s first marriage and 4 grandchildren (with a 5th arriving in 2021) are frequent visitors.

Bogan is no stranger to community service, and his professional and volunteer accomplishments make him a perfect fit for his role in local politics. A partner at the international law firm, Locke Lord LLP, David’s practice spans New England and encompasses all aspects of public utility regulation. His 30-year career has earned him a place – every year since 2010 – on U.S. News & World Report’s list of “Best Lawyers in America.”

From serving as the chair of the Connecticut Coalition Against Domestic Violence and his involvement with Hyannis based Independence House, to his support of the Big Brothers/Big Sisters Foundation, Bogan’s focus has always been on helping those who need it most. Until just recently, David traveled from Osterville to Springfield, Massachusetts on a regular basis to mentor his “little brother” as part of the Big Brothers/Big Sisters program. He met his lit-tle brother when the boy was just 9, and has watched him grow into his teens. “Unfortunately Covid put a crimp in our schedule, but I check in with him every so often,” Bogan remarks. “He is growing up to be a fine young man.”

Why the passion for helping others? Bogan explains, “I’m the son of a single Mom. My Mom and I worked very hard for the life I get to enjoy today. I stand up for people who may not have the ability for whatever reason to stand up for themselves.”

David’s formative years were spent not far from the south side of Chicago in the turbulent late 1960s. “My good fortune is the product of my mother’s labors. She got me involved in drama classes when I was just 5, and stage productions by age 11,” he recalls. “The idea was for me to learn elocution, to speak up and be heard. I did.”

David’s career in law began with his role serving as an attorney for the Connecticut Consumer Counsel, the agency charged with representing utility ratepayers. Time spent representing consumers against public utilities eventually progressed to representing competing utilities against larger entities commanding the dominant market share. While he has represented just as many shareholders as ratepayers, there is a distinct David vs. Goliath thread stitched throughout his success.

How did David come to pursue local politics? “It was a Sunday morning,” David recalls with a smile, “Ten days before signatures were due, we were reading the paper, and Heather said, you should run…” David responded, “You run... you’re smarter than me.” Heather remembers it like this,
“I said, unfortunately, I am not especially likeable, so it’s gotta be you. Turns out, he’s really well suited to it: engaging with people is energizing for him, and he is a pragmatic problem solver.” While David disputes his wife’s self-deprecating view of her “likeability,” he does still maintain Heather is indeed smarter, evidenced by virtue of the fact her suggestion fast became reality. “All of a sudden I was out there looking for signatures in front of the post office…and along comes Jim Crocker. Anticipating the inevitable initial discomfort of the face to face, I said to him, ‘Hi, I’m the guy who’s running against you.’ Jim couldn’t have been more welcoming and friendly… it said something about him.”

At the too young age of 63, Crocker passed away only weeks before the election in the fall of 2019. All of a sudden, David found himself alone on the ballot. Despite facing a write in challenge from another long-time village resident, Bogan suspended his campaign activities and asked supporters to take down their signs
to show respect for Crocker. “This was not a time
for campaigning, it was a time to recognize the
accomplishments Jim made. He served this
community for decades…the community was
grieving. It just wasn’t right to have a feeding
frenzy of politics in the void left by this man.
That’s not what we’re about…that’s not what
Osterville is about.”

Ultimately Bogan won the election and was sworn in to the 5th precinct council seat. Then, barely three months into his term, the Covid-19 pandemic hit.
Massachusetts shut down. Osterville, Barnstable, all of Cape Cod, the state and the entire nation learned, or at least tried to learn, to live a new way of life in the months that followed. With zoom meetings replacing face to face meetings the business of the town had to move forward.

Which issues does David Bogan identify as most important to Osterville and his precinct 5 constituents? In no particular order of priority, there are three. Clean water and preservation of the three bays ecosystem for residents, flora and fauna alike is critical, he says. “Cape Cod is a highly sought destination, both for visitors and those, like me, who made the move to call it home.” He goes on to describe that the dynamic of supply and demand where it meets real estate involves a finite resource in Cape Cod’s aquifer, “Due to our geography, our drinking water supply is replenished only by precipitation.” Given the continued demand to build and live on the Cape by those looking to bail out of Boston or beyond, only exacerbated by the pandemic, he adds, “we need to have safeguards in place.”

he second issue David sees as impor-tant to village residents is perhaps a bit more contentious. It involves protecting residential property zones from a revolving door of short-term rental turnover. With AirBnB and similar online websites creating the potential for weekly and daily rentals to command several thousand-dollars fees, it’s revenue many homeowners can’t resist, especially
for those who have had their income curtailed by the pandemic. As homeowners, some residents feel it is their right to rent out their home for profit. For neighbors however, who have to deal with what can amount to noisy frat parties next door, their hope is that residential zoning regulations can protect their peace, quiet and property value. The same issue is hotly debated in a great many tourist destinations nationwide. Many communities have struck a successful compromise. The hope is that with David’s experience negotiating contracts for vast public utilities, navigating town ordinances toward a happy medium can be success-fully achieved.

How does he see his – and the town government’s – role? “Barnstable needs to address the issue insofar as planning; our residents have to be adequately ducated and informed on just what we’re talking about; local employers need to play a role as well. I feel that
if we can all work to get on the same page, that’s the heavy lifting and the rest will follow suit.”
In the midst of a pandemic, all of these are daunting issues to tackle. We asked David’s wife Heather about his consistent, positive attitude. She replies, “He is an equalizer. He erases things like titles, positions, skin color, gender – the things that can separate us. It makes him that guy people turn to when they’re trou-bled about something sensitive but don’t know who to talk to. It’s under the radar kind of stuff, but the stuff that really makes a difference. It’s one of my favorite things about him.”

At home, you’ll find David in the kitchen. His secret recipe for ribs creates such demand he even shrink wraps the racks for family and friends.

His culinary repertoire is not limited to barbeque… his Osso Buco is said to be a symphony for the senses. “Cooking is my stress relief,” he says. “Everyone loves the ribs, they all want to know the secret,” he laughs. “For the holidays I give a rack to everyone in my office.”
Does David share space in the kitchen with his wife Heather? Who wears the apron in this family? Heather says, “David has the kitchen to himself. I don’t make anything that takes me longer to cook than to eat. I’m glad he didn’t adopt my rule.” Their relationship didn’t start out with David “wearing the apron.” They met in a professional setting. She recalls, “David appeared before me as a lawyer when I was a Public Utility Commissioner. He had to call me “Your Honor” back then. It doesn’t happen anymore.”
If you see your town councilor and his sidekick Bistro in the village, say hello. Ask him about an issue facing the village – or try to ply him for that secret rib recipe. He is always ready for a chat. Although Covid and the pandemic prompted unprecedented change in
2020, Bogan continues to exude positivity, while
acknowledging the struggle we face as a com-
munity. “I’m willing to be patient…And let me
add, I am thankful that I am fortunate to have the
luxury to be patient. I realize it’s very difficult for
some people. I look forward to having this chapter
behind us.”