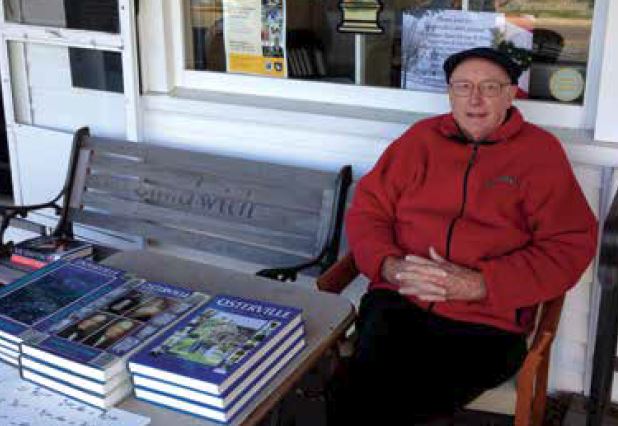 Paul Chesbro’s roots are firmly planted in Osterville. He remembers
Charles Jones and Albert “Allie” Colman driving their horse-drawn
wagons in Osterville Center when he was a boy in the early 1940s.
Just a few years later, Studebaker cars were parked along the side
of the street – a subtle indicator that times were changing. But what
had come before? What was it like when his ancestors walked the
streets of Osterville? Who were their neighbors? What was their life
like way back when?

Mr. Chesbro has spent his life in the service of carefully documenting
Osterville’s history (without a computer) by poring through records,
old photographs, grave rubbings, letters, and newspaper articles from
the past. His creative skills, together with a historical detective’s ability
to piece together the past have resulted in a series of books with jawdropping
photographs that make a richly rewarding read.

Ironically, it was a trip to Arizona that fueled Paul’s burgeoning passion
for learning about his own ancestry and Osterville history. On a tour
to the Grand Canyon while visiting a great aunt in Phoenix, he met
a woman from Bristol, Rhode Island whose son-in-law was Nelson
Blount, the owner of Edaville Railroad in Carver back in the 1950s.
Paul had heard his mother mention the name. When he returned
home, he learned from his great-aunt, Emily (Crocker) Hallett, that his
great-great-grandmother was a Blount.

About that time his mother became president
of the Osterville Historical Society. Paul started
displaying old photos from the museum’s archives
in the window of a local bank. When he started
writing about village history for the Village Advertiser,
the local weekly newspaper, people started to clean
out their attics and send him records and photos.
He spent hours at the Sturgis Library researching the
Barnstable Patriot archives from the 1830s and writing
down anything he read about Osterville. He wrote
to countless town offices and libraries for records
and information to complete the research. A big
find came when a house in the village containing
all the old town records from 1696 to the Civil War
was moved, and the records were given to him.
Another monumental discovery was an extremely
long letter written by Augusta (Lovell) Rich in 1877
that detailed the lives and locations of the families
and their homes in the village. In one of his books,
Paul assigned a number to each person mentioned
in the letter and then provided related photos, poems,
grave rubbings, records, and news items related to
that person.

Stories from the past can come to life when you
least expect it. Lazarus Lovell (1700-1777) prayed for
a church in the village. Paul learned of Mr. Lovell’s
wishes in a poem that he received when he was
tracking down another Osterville descendant by
contacting the office at Mt. Auburn cemetery in
Cambridge. Mr. Lovell’s prayers were answered.
Paul learned that the Baptist church in the center
of the village was built over the foundation of Mr.
Lovell’s house. Paul actually got to see the original
Lovell homestead foundation when they were
adding onto the church.

Paul has spent thousands of dollars over the years to
research and publish his brilliant books, which are an
important part of the collection of local references
available in the Osterville Village Library’s Cape Cod
Room. If you’re here in the summer, look for Paul at a
table in front of the barbershop on Saturday mornings,
where he has three separate volumes available to
purchase. And don’t be afraid to sit and chat for a while.
You’re sure to learn something new about Osterville,
and he might even introduce you to the descendants
of people featured in your new book as they stroll by.