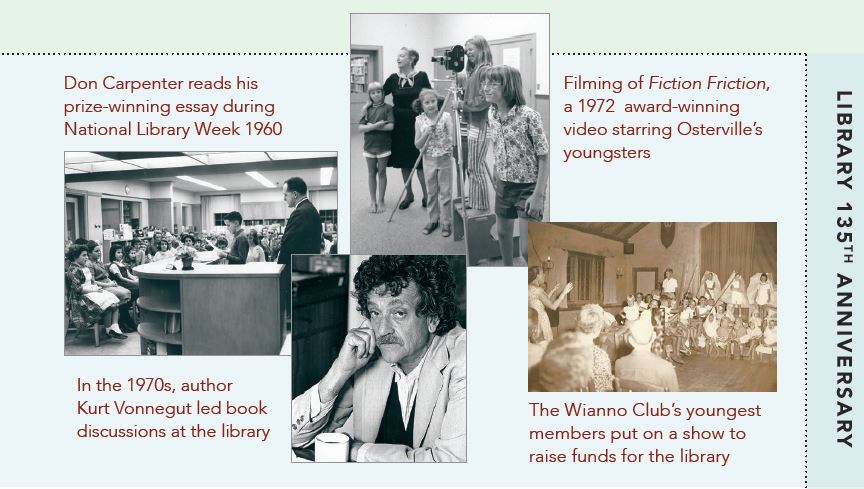 I’ve really only known the Osterville Village Library for the last seven years
after Joe Cedrone and I bought a weekend house in the village. I often
went to the library on Saturday mornings to peruse the books and to get a sense of its history.
I had a great interest in libraries as I had served as a trustee as well as treasurer of the Milton Public Library.
When the new library, designed by Charles Bellingrath and Jeremiah Ford, was dedicated in 2012, it was impressive.

It had three floors, was modern and state of the art, and had a wonderful staff that seemed
not just helpful but friendly when I asked a variety of questions. We
enthusiastically participated in the fundraising. We created tiles for the new Children’s Library and contributed to the building fund.
So when I was approached by the library about writing the
history of the Osterville Village Library (as I write
on local history), not only was I honored but I was greatly intrigued. I sensed I would learn not just about the history of the library, but also about this village that I’d come to enjoy, with its bucolic setting on the Nantucket Sound, large swathes of protected land, and a village center that served all of our needs.
The Osterville Free Library, as it was known when founded in 1882, can actually be traced back to 1873 as the Osterville Literary Society, and the lending library was located in the converted dining room of the James Allan Lovell House, where Thankful Hamblin Ames lived and served as the first librarian. The library was to outgrow the small room in less than a decade, and was moved to the Dry Swamp Academy behind the Osterville Baptist Church.
In 1881 William Lloyd Garrison, Jr. solicited both year-round and summer residents to pledge money to build a new village library. Not just was
the necessary money raised, but Garrison himself purchased the land on Main Street at Mulberry Corners, the junction of Parker Road and Main
and Bay Streets. The library was built by Charles Daniel, a local builder. The incorporators of this new library were William Lloyd Garrison, Jr.,
Anna Davis Hallowell, Herman W. Chaplin, Francis J. Garrison, Pierrepont Wise, Charles W. Storey and Jeremiah Chaplin. As stated in its articles
of incorporation, the library served as “the maintenance of a free library and reading room at Osterville in the Town of Barnstable in this
Commonwealth, and the promotion of study and reading.”

The small wood Queen Anne style library (now a part of Oyster Island Emporium) was
opened to the public on January 2, 1882, and was the fourth library to be established
on Cape Cod. (It was preceded by the Sturgis Library in 1863, the Hyannis Library
in1865, and the Centerville Library in 1869.) Over the next seventy-five years, much of
it overseen by librarians Reverend Edward Bourne Hinckley, Eliza Lovell, Bertha
Lovell Hackett and Katherine Hinckley, the small library continued to grow and offer
the lending of books, and a place for both students and adults to study and to read,
as well as to act as a community center.

The residents of Osterville, both permanent and summer, joined together to support the library through direct donations and events.
By 1932, the library “kept pace with the growth of the community, as the telephone, the motor, the radio, have drawn it into more intimate contact with the world outsides of Cape Cod.” But by 1957, the small library had provided yeoman’s duty and was stretched to the limit. It was said that with increased requests “for certain books and cramped quarters for stacking and storing same have made it necessary…to plan a campaign to have a larger and more adequate facilities to keep abreast of present times.” A campaign was started with a then-anonymous donor, who provided matching funds of up to $100,000 before September 1, 1958. So successful was this 75th anniversary campaign that the library trustees engaged local Osterville architect Stanley F. Alger, Jr. Mr. Alger designed an attractive Colonial inspired library that transformed the old Eaton Store Block at the corner of Wianno Avenue and West Bay Road into a community center and a traditional library that quickly became a fun and engaging place for all. It was designed with ample space for an adults lounge, separate study areas for adults and young adults, and a children’s reading area with a hall that could be used for both lectures and story telling hours. From the capital campaign in 1957 that was so generously contributed to by Rachel Lowe Lambert Lloyd
Mellon (known as “Bunny”) and Paul Mellon to the expansion in 1968 through a generous contribution by
Maxwell Upson, the library was truly the pride of Osterville. It seemed as if everyone contributed to its expansion and
well-being within their financial means.

Over the ensuing years, the Osterville Village Library continued to expand services. Circulation dramatically increased as did events and programs that brought in larger and more diverse audiences. Programs included art exhibits, the bi-weekly “Great Books” book discussions in the 1970s led by Kurt Vonnegut, an award-winning children’s film project “Fiction Friction” by Marjorie Lenk in 1972, and kite-flying day at Dowse’s Beach. Funds to support expanding programs were partially raised with a myriad of events that have become village traditions: benefit concerts, the golf tournament at the Wianno Golf Course, clambakes, road races and the annual car raffle.
The trustees and library staff have been greatly aided by the Friends of the Osterville Village Library. What really impressed me was when I
perused the trustees’ minutes (yes, I read every line from 1882 to the present) and scrapbooks from the 1950s to the present was to see so many dedicated people who did their best to support the library and make it accessible to all.
The newest iteration of the Osterville Village Library has brought
hundreds of residents and friends who share, with pride, in the vast achievements since 1882, when the library was formally incorporated
and dedicated to the ideals of a free lending library and in “the
promotion of study and reading.”
My labor of love, Osterville Village Library (Arcadia Publishing, 2017)
is a heavily illustrated book with more than two hundred photographs of the various library buildings, the trustees, library staff, patrons, and those who supported the library by attending the myriad events held over the years. This book was a fascinating research project that chronicles not just the growth and development of the library over the last 135 years, but also reinforces that the library is truly the center of Osterville Village.