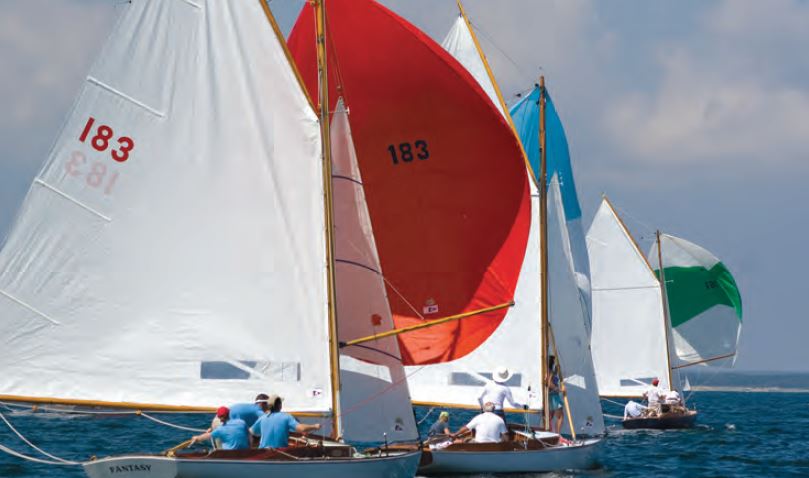 The beloved Osterville native is 100 years old and still going strong, gracefully plying the waters of Nantucket Sound, skimming the
shallow current, averting shoals, harnessing the fickle winds, and asserting her place in the hearts of sailors who have, for generations,
built the foundation of family and friendship upon her full keel.

For this 25-foot gaff-rigged, keel-centerboard sloop has been a mainstay on these waters since Horace Manley Crosby fulfilled his
commission from members of the Wianno Yacht Club to design and build a wooden boat for racing in the Sound. The result, in
the summer of 1914, were the fourteen original, whose graceful overhanging sterns and gently curved bows provided the perfect
combination of speed and functionality for day racing.

Since then the boat has enjoyed a storied history, bolstered, in greatpart, by its role in the political fabric of America.
President John F. Kennedy’s ownership of the Victura, customarily referred to as Hull
#94, garnered the design a place in the collective heart of America as he sailed this boat during youth, as well as the Camelot years.
That historic treasure is currently on display at the Kennedy Presidential Library in Dorchester.

But it was not just Jack Kennedy who prized the design. Generations of sailors – those from the Wianno, Hyannis, Hyannis Port,
Stone Horse and Bass River Yacht Clubs – have been raised racing this boat for decades. And it is the tradition of sailing summer after summer
with friends and family, and the memories created therein, that earned this sloop the reputation of being the perfect boat that marks a place –
the south side of Cape Cod.

For many, Cape Cod and the Senior are deeply intertwined. Tim Fulham, owner of hull #142, recalls that the first time he sailed on a Wianno Senior he was but nine years old. “My family purchased a Wianno Senior in 1968 and I have been sailing them every summer since (except for a ten-year hiatus in the 1990s). It is a remarkably
sea-going boat; it feels wonderful, secure, and capable under foot in all conditions...Under sail, it is wonderfully balanced and a delight
to sail. ”Wianno owner Dave Trimble has owned a Senior for nearly 15 years, losing his first, #109, in the devastating five-alarm fire that occurred at
Crosby Yacht Yard on December 10, 2003 in which 21 Seniors were lost. He loved the boat so well that he bought another, #193, which was the
first new boat that was launched after the fire in February 2004. The boats, he says, are unique and wonderful. “They are the older, classic
gaff-rigged design that’s very pleasing to look at. The boats are fun to sail, and a challenge to sail fast. They’re designed for the choppy
waters and blustery winds of Nantucket Sound. They sail through the waves, handling very well; though, with their low free-board, you’ll
get a little wet.”

Stewart Roach is Fleet Captain of the Wianno Senior Fleet, and a member of the Wianno Yacht Club. He speaks lovingly of the boat he
has sailed for 38 years, recalling its history, relishing his own personal memories. “Every spring, Crosby Yacht would deliver the Seniors to
their owners, freshly varnished and painted. I still remember the smell of the wood mahogany cabin as I slid the deck hatch forward as a
young sailor. Truly, you could smell the history of the boat.”

He notes that sailing the Senior was a rite of passage of sorts for a young sailor. “It was every young sailor’s dream to be asked to crew
in a race which usually occurred only when someone who regularly crewed could not make it. Because it is gaff-rigged, the Senior is
a lot like a big Beetle Cat, except that it has a jib and a spinnaker. So, it was a natural for anyone who sailed on the Cape to make the
transition to the Senior.”

The original design was completely wooden, but during the 1980s a meticulously methodical process was initiated to transition the boats
to fiberglass hulls. “To this day,” notes Roach, “the mast, boom and gaff of the Senior all still are made of wood. The hulls are now made
of glass, although some wood boats still compete competitively in local racing.”

The love of a sailor for his boat can be poetic in scope, and Roach’s praise for the Senior is a paean to the beauty and grace of fine,
traditional craftsmanship, as well as the stirring power and beauty of nature.

“By far, my most favorite moment of Senior Sailing is the sail in after a day’s
racing,” he says. “Usually the boats finish the race fairly close together, and as we approach the cut entrance of Osterville the boats always seem to merge at the same time on a slow run back into the West Bay. I love to hear the chatter and the banter that echoes under the blanketed sails amongst the skippers and crews and the laughter that transpires after a day of racing.

To be in the warm waters of Nantucket Sound and sail such beautiful boats for the last 38 years has honestly been such a treat, and one that I hope continues. The class has managed to survive depressions and recessions, and competition from other builders, yet the class pushes on.”
For more information about Wianno Senior Sailing and the activities planned for this summer please refer to the
calendar section of this guide and visit WiannoSenior.org.