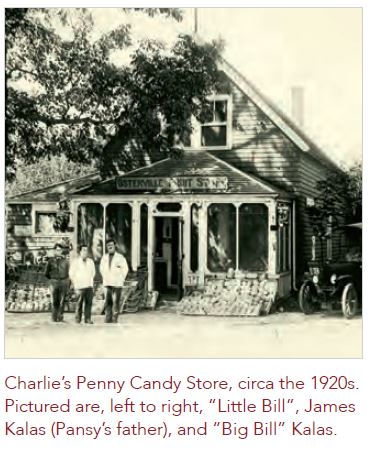 A Portrait of Pansy Kalas

Many remember going to the “Penny Candy Store” or
“Charlie’s” as you enter the village, but for Pansy Kalas, it was home.

Located just across from the flagpole, the red building with the country store charm now houses Vintage Flowers. Built by Charles Crosby in 1890, the Kalas family operated the Kalas’ Fruit Store beginning in 1915, when James Kalas purchased the property. Kalas had three children – Georgia, Charles,
and Pansy. The family operated the store until 2000. Having lived for decades in the family’s apartment at the store until it was sold, Patsy Kalas had a bird’s eye view of life in the village, and a lifetime of Osterville memories she gladly shares.
Reflecting on her Greek heritage, she remembers picking grape leaves in Osterville as a young girl. Both of her parents came to the United States when they were children. She
remembers going to church faithfully, and the advent of paved roads through the village.
It took a horse and a pulley system to move the Kalas’ Fruit Store back 40 feet to widen and pave the road in the 1920s. Pansy says that it took weeks to accomplish the task, and the family lived in and operated the store during the moving process.
Likewise, the advent of greater access to automobiles and the availability of delivery trucks changed
life in the village. Pansy’s father sold the horse and wagons that he had
been using to make way for trucks. Pansy recalls one day, out of the
blue, a working horse broke free in the village and came right up to the window of the store.
The horse gently bowed his head as Pansy’s father approached the
window. “That was the only time that I saw my father cry,” recalls Pansy.
He recognized the horse as the one he had sold months before.

During WWII, she dutifully raised an lowered the village flag every day
and served as air raid warden. Soldiers used the store’s phone
booth to call home. When the war ended, she rang the bell at the
Methodist Church. She has many happy childhood
memories of playing with her brother and sister in the open fields on Bay
Street and at the beaches. To this day, she remains very proud of
Osterville – her home. On July 26, 2013, Kathleen Capo,
president of the board of the Osterville Historical Museum,
presented Pansy Kalas with the Blount Cane. The Blount Cane is
awarded to the oldest Osterville person who has been active in
village life; Patsy Kalas is the 36th person to hold that honor.