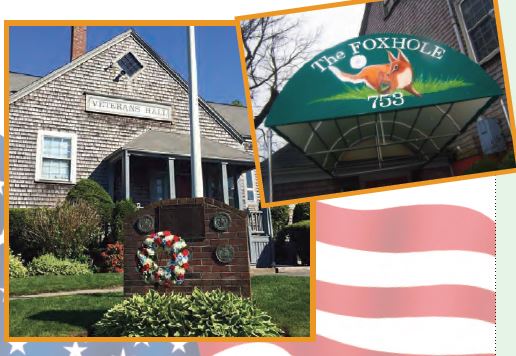 At the corner of Main and West Bay Roads in
the basement of one of Osterville’s most historic
buildings is the village’s favorite watering hole,
and everybody knows its name: The Foxhole.
Look beyond the beloved local bar and there is
an interesting, little known story.
The Osterville Veterans’ Association (OVA) building
was built in 1897 as a community gathering place
with funds raised by selling $5 shares to villagers.
“It was like a subscription,” explains OVA Board
of Directors president Neil Andres. “If you bought
a share it meant you had a share of the building.
This was in the days when residents lived in small
houses and their share would allow them to use
the hall for social gatherings.” The new building,
first known as Union Hall, had a small basement
and a large stage and hall upstairs. The heart of
the village, the structure was briefly a school and
for a long time, the site of a myriad of events from
minstrel shows to weddings to spelling bees to
dance recitals.

Eventually the Cape Cod
Horticultural Society took over
and for years, and it was known
as Horticultural Hall until 1947,
when the building became
home to the Osterville Veterans
Association. The Horticultural
Society sold the building to the
OVA for $1 with the provision
that the building be available
for public and civic use.
Osterville has a notable military history. During WWII, the very small village sent
158 men to serve. Five did not return. During the war, the village was swarming
with soldiers, many of whom trained on landing craft at what is now the Crosby
Yacht Yard and slept in tents pitched on the Wianno golf course. It was during
this time that a canteen was literally dug out of the basement of Horticultural
Hall by Seabees (Naval Construction Battalion) stationed in Crosbytown (today’s
Crosby Yacht Yard) providing soldiers with a place to gather and relax.
Post WWII, a small group of seven Osterville veterans – John Linehan, Roger
Johnson, Francis Wyman, John Aylmer, Louis Williams, Clarence Burnet, and
Joseph Pendrak – made the troops’ gathering spot official by incorporating the
Osterville Veterans’ Association. Its purpose, according to the group’s original
charter is “to commemorate the services of those who served in the Armed
Forces and in the Maritime Service of the United States, or any of her allies, in
time of war, to promote and foster social meetings, athletic exercise and civic
betterment in the community of Osterville.” The charter goes on to say, “These
purposes shall include the right to apply for a license to sell alcoholic beverages.”
legitimizing the small canteen which grew to become The Foxhole.
A Navy veteran, 91-year old Don Harding remembers when the club had just
a handful of members in the early 1950s. “We only had about 10 or 12 at the
meetings,” he recalls. “It was small then. No pool table and Charlie Kalas who
went on to own the Osterville Village Country Store at the corner of Parker
and Main Streets, was the bartender.”
Today, the OVA is a 110-member strong organization that
maintains a steadfast pride in and commitment to its
community involvement. Whether it’s re-shingling the
house of a veteran who cannot afford repairs; sponsoring
youth sports teams; sending members to overnight
guard the traveling exhibit of the Vietnam Wall when it visited Hyannis; or bringing flowers
to aging veterans in nursing homes,
”I wear my uniform,” notes Andres.
Each year the club awards thousands
of dollars in scholarships to deserving
high school and/or college students.
The Osterville Veterans’ Association
donates to the Veterans Outreach Center
annually, brings coffee and donuts for
volunteers at the National Cemetery
on Veterans and Memorial Days, and
sponsors “Vets Fishing with Vets,” an
annual fishing trip for veterans out of
Hyannis Harbor.
In an age where there are many veterans’
organizations that are struggling, the
OVA is thriving. “We plan to keep going,”
imparts Andre. “We’ll be here for
our veterans and the community as a
safe little place between Hyannis and
Mashpee to provide social gathering
and camaraderie.”
Recently the OVA made a loan to
the Osterville Historical Society. It is a
flag that hung behind the stage of the
hall for many years. Osterville Librarian
Katherine Hinckley sewed it during
World War I and it features a star for
everyone from Osterville who served in
the conflict including Red Cross nurses.
“It wasn’t being seen and it needs to
be,” says Andres. A bit like the Osterville
Veterans’ Association.